Yong Luo and colleagues recently had their paper published in Journal of Ecology. Read more about their work below. By using permanent sample plot data from the central Canadian boreal forest region, where warming did not result in water deficit, Dr. Yong Luo and his colleagues found that growth increased over time for trees under weak competition, but decreased for those under strong competition. The divergent temporal trends among trees under different levels of competition led to a non-significant change in growth at the plot level. Growth increased with regional warming, atmospheric [CO2] and water availability for trees under weak competition, supporting the hypothesis that tree growth of a boreal forest is limited by heat, water and atmospheric CO2, and climate change has positive effect on tree growth. However, for those under strong competition, the tree growth is generally negatively related to climate variables.

The results suggest that upscaling the growth responses of dominant/codominant trees to climate change to a forest or a region can lead to overestimates. Furthermore, the study suggests that increases in carbon sequestration associated with climatic change-enhanced forest growth may be weak in forests where water deficit is not an issue. Finally, the study sheds light on a mechanism of climate change-associated tree mortality. Trees experiencing weak competition grow more rapidly in response to climate change, in turn enhancing their competitiveness and further suppressing the growth of smaller trees that were already experiencing strong competition.

Michael Foisy and colleagues contributed a paper to our latest special feature: Macroevolutionary perspectives on biotic interactions. Find out more about their paper below.

A brief history of the project

When an insect chomps on a plant, sometimes the plant tissue will release latex or resin – a “goo” that can be toxic, difficult to digest, and a real nuisance for insect mouthparts. Latex and resin are stored in pressurized canals, which, when damaged, rupture and spill their contents out in dramatic fashion (Figure 1). These canal systems have evolved many times across plants, and play an important role in defence against herbivorous insects.

In 1991, Farrell et al. conducted a now classic study testing whether plants with these pressurized canals are more diverse than closely related plants without canals. Their results were striking: 13 of the 16 comparisons revealed higher species richness when canals were present, supporting the prediction that plant defensive traits are associated with higher diversification rates (i.e. the accumulation of species over time, estimated as the net of speciation minus extinction) in plants.

Their study was one of the first to show strong support for a classic hypothesis about how coevolution between plants and insects could generate biological diversity (Ehrlich & Raven, 1964), and their work remains a prominently cited empirical example even today.

In the three decades since the original study by Farrell et al. (1991), major changes to plant systematic relationships have occurred, and we now have phylogenetic comparative methods that go beyond the sign test they used. In particular, we can explicitly model trait evolution and/or diversification rates. Therefore, our goal was to reassess Farrell’s classic test of whether these defensive “goos” are associated with increased species diversity, but to do so using modern methods and data.

We collected data on the occurrence of latex and resin canals in approximately 300 families and 1000 genera of plants, and used these data (along with updated phylogenetic hypotheses for plant relationships) to test the association between canal evolution and lineage diversification rates. We tested this hypothesis at multiple scales: (i) between clades and (ii) within clades.

As usual, biology is complicated

When we updated and added to the Farrell dataset, interestingly, we no longer found strong support for a relationship between canal evolution and lineage diversification. This was surprising, and so we wanted to zoom in on some of these comparisons, to look at the tempo of diversification in relation to trait evolution.

Within clades, we had enough data to look at two groups: Papaveraceae (poppies) and Araceae (arums). In poppies, the timing of latex evolution coincided with a burst of diversification; however, in Araceae, canal evolution appears to be entirely out of tempo with diversification. 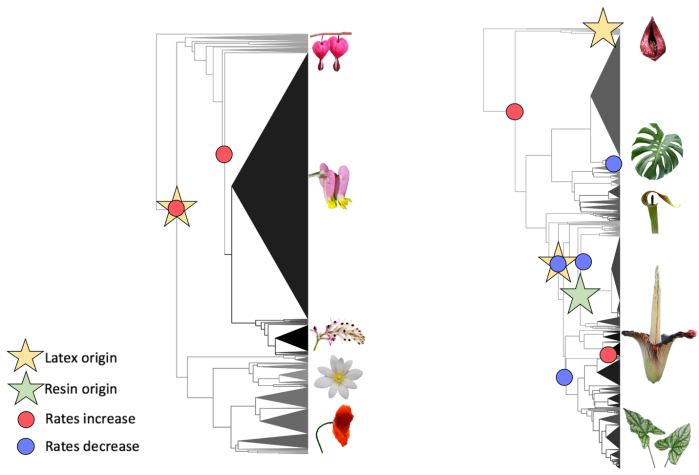 Thus, it seems that latex and resin canals may not be as consistently replicable drivers of lineage diversification across plants as we previously thought. Future studies could follow up on this work as more data becomes available, for example using more sophisticated models of trait dependent diversification, or taking other factors (such as clade age) into account. We are looking forward to the day that more data are available, so that this association can be even more rigorously examined in even more clades. But in the meantime, latex and resin remain super cool defensive traits with large consequences for plant fitness. Who doesn’t want a powerful goo weapon to fight their enemies?!